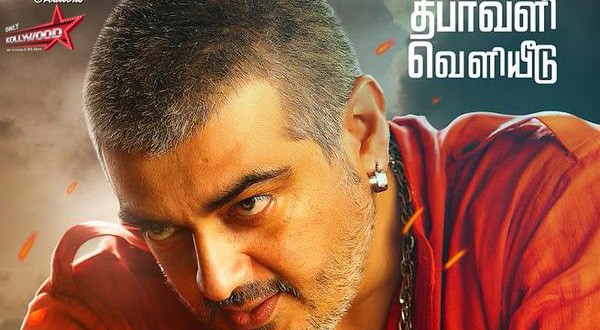 Ajit Kumar starrer tamil Action movie “Vedalam” would be releasing on 11 November 2015, the film is being directed and written by Sica and Produced by S. Aishwarya under the production banner of “Shri Sai Raam Creations”. Vedalam also has Shruti Haasan, Lakshmi Menon, Aniket Chouhan, Kabir Singh in lead roles. After the4 huge box office success of the Movie Veeram in 2014 Directo Ajith announced he would work gain with Ajith along with Ashwin. Music :
The music and background of the film is composed by Anirudh Ravichander.

Casting :
It is also earlier that Tamannaah Bhatia and Hansika Motwani were originally considered for the lead pair finally Shruti Haasan bagged the role for Vedalam . After a huge appreciation from the critics for his performance in Telugu film Jil, Kabir Singh was selected to portray negative role in the movie. The film which began production in 9 April 2015 will be released in November 2015. Jaya TV purchased the complete satellite rights of the film “Vedalam”.

Official Music Released on 14th October 2015, already had a huge success online and drove around 500k views, Here is the video