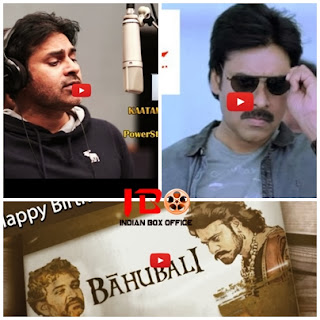 Now-a-Days In tollywood the views of videos in Youtube became more prestigious to Heroes and his fans. Fans Getting more curious About views and Which video is on Top for Day1 regarding in views. So our Indian Box Office brings you the Top 3 Youtube Videos in Youtube for day1.
No.1:- Attarintiki Daredi KaatamaRaayuda Song
Attarintiki Daredi KaatamaRaayuda Song stoods No.1 Place with 387,000+  views in one Day. Pawan Kalyan he himself sings this song. It bacame a Huge hit and got mad for his fans. So unanimously this is
the No.1 Video for Tollywood in Youtube Day1. this video is uploaded in Maa Tv Official Youtube Channel. Till Now This Song Has 27,81,214 + views. Here is the Video.
No.2: Attarintiki Daredi Theatrical Trailer
Attarintiki Daredi trailer got 337,000+ views in 1st day. Recently Industry Hit Attarintiki Daredi Theatrical Trailer placed in The Second Place in Views on Day1. Till Now it has 29,03559views in Maatv Offcial Youtube Channel.
No.3:Baahubali Making Video
Baahubali Making Video in 3rd Place which scored 318,000 +views in 1 day. Rajamouli Latest Sensation Bahubali Starred with Prabhas ,RANA, Anushka failed to be in 1st position. here is the official 1st making video of Bahubali Which is released in occasion of Rebel Star Prabhas Birthday.