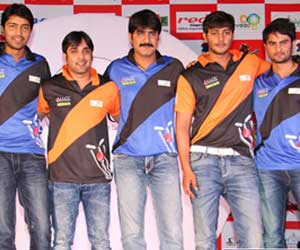 Tollywood Stars are prefer to play cricket in Vijayawada-IBO

Tollywood Stars are prefer to play cricket in Vijayawada-IBO:

From the latest news of IBO is , the Tollywood Stars are prefered to play cricket in vijayawada for the Hudhud victims in Andhra Pradesh in their possible ways.Tollywood stars are  planning to conduct funds for Hudhud victims  raising event on Novmber 30th.Tollywood Film Stars are organising the Star Cricket Match at Indira Gandhi Stadium, Vijayawada.

Srikanth said TC  is which is the entertrainer to all the audience and both the two teams in TCL.The collected money and the funds should be give to the Hudhud victims for the relief..The tollywood actress are try to help who suffering from the Hudhud Cyclone.

Allari Naresh and Tarun said to the TCL is a two teams will comprise of Tollywood stars.The entire collections of the match will be donated to hudhud cyclone victims .All the other actress are decided to do help for Hudhud Cyclone Victims through the Tollywood  Crcket Associate ( TCA).The stars are expecting this match is very helpful to cyclone victims and also give the entertainment to the audience..