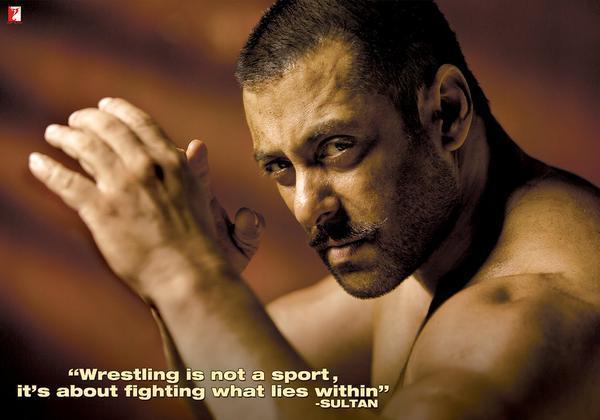 Bollywood’s Bhaijaan, box office King Salman khan is ready working with Yash Raj Films “SULTAN”, which is directed by Ace director Ali Abbas Zafar this was a much awaited and talked about movie salman’s fans were looking forward to, as it would depicted Salman khan in a very different intense look where he plays as a Wrestler from Haryana – Sultan Ali Khan.

After the huge success of Bajrangi Bhaijaan which topped the bollywood industry profitting 626 Crores, one of the highest any bollywood movie have collected, salman khan has started preparing for the role of Sultan. Salman has also released official Poster of Sultan on his twitter handle : Salman khan is preparing for the role with a very strict Diet plan, and physical activities in the GYM to play as the 40 Year Old wrestler from haryana. The intense training programme for Salman is managed bySalman khan. Its reported that the new look is also seen in the Big Boss Season 9 episodes.
Hear the Background in the Offical Teaser “Haryana State Championship Ka Finals Rakesh Sanghwan Aur Haryana Ki Shaan Haryana Ka Sher Haryana Ki Jaan Sultan Ali Khan”

The Official release date for Sultan is 8 Jul 2016, which would clash with Shahrukh Khan’s “Raees”, surely is Clash of the titans on the box office. Salman is also packed with lot of projects for the next couple of years with some big banner films :

Salman khan as Sultan was seen traning as a westler for the movie. Seems the actor is All bulged up for his next milestone. Stay Updated for all Latest news of Salman Khan’s Sultan