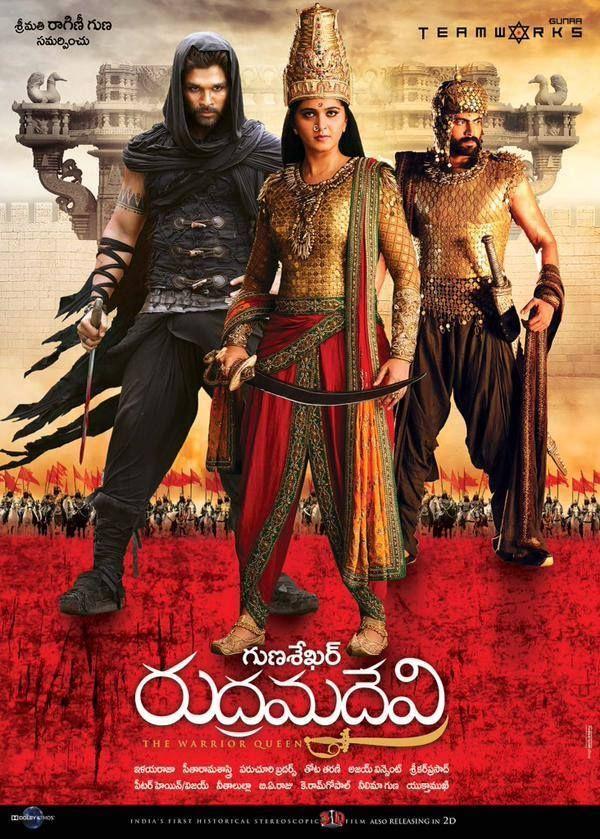 Directed by Gunasekhar is film of Rudhramadevi who was one of the prominent rulers of the Kakatiya dynasty in the Deccan Plateau, mainly known for her Administrative, Warfare strategies and bravery. Gunasekhar has roped Megastar Chiranjeevi to narrat the film. The main lead is played Anushka Shetty as Rudrama Devi with Allu Arjun, Rana Daggubati, Vikramjeet Virk, Prakash Raj, Krishnam Raju, Nithya Menen, Baba Sehgal and Catherine Tresa.

The Story backs to the year 1234 when Girl as a successor of the kingdom was not acceptable, Emperor Ganapatideva on birth of her daughter was forced by Shivadeviah to announce as a Son later named as “Rudradeva”. The story revolves between Rudhramadevi, Gona Ganna Reddy played by Allu Arjun and negative role played by Mahadeva Nayakudu (Vikramjeet Virk). Rudhramadevi shooting was done in Warangal. Rudhramadevi Movie was released in Telugu, Hindi on 08th October, 2015 and also has been dubbed in tamil which is going to be released on 16th October, 2015. The film has done very good business in the box office, the first day box office collections globally for both Telugu and Hindi version is 20Cr. Trade Analyst estimate the movie should be in the 100 Cr club and even go beyond 150Cr.

Day 2 brought more business due to weekend with business totalling to 21.50cr for the day, Rudhramadevi Movie is one of the highest grossing telugu movie of 2015.