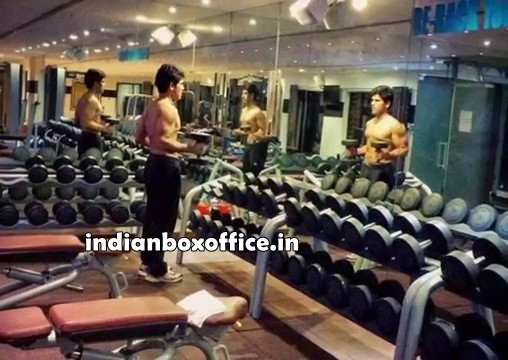 As all you know, if any hero comes with their family background will have expectations from Audience. That to if he is from MEGA COMPUND Audience will have more expectations on him. Starting from Pawan Kalyan, though he was introduced as Chiranjeevi brother, himself he worked hard results now he is one of the Top Most Hero of Tollywood. In that way Ram Charan, Allu Arjun also proved their talents in Dances and Fights in their movies. Coming to the next generation of their family Sai Dharam Tej bangs a Hit with Pilla Nuvvu Leni Jeevitham and Naga Babu son Varun Tej got the Positive marks for his Classy look in Mukundha.
But coming to  Allu Sirish (younger brother of Allu Arjun) struggling for a hit from his first movie. His debut movie Gowravam was failure and 2nd movie Kotha Janta is also not a big hit. For this He is doing Heavy workouts in Gym and finally he is ready with 6 Pack Body for his next Film. Hope he will get a Big hit for his upcoming movie.