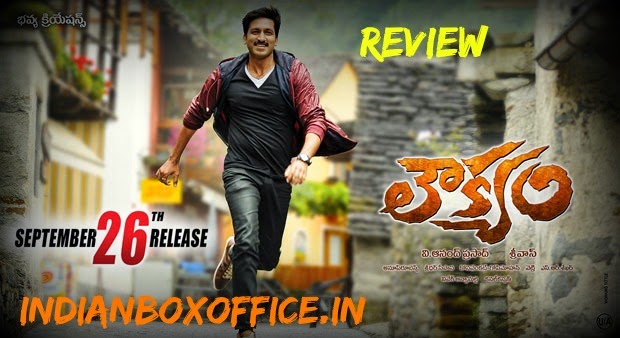 Loukyam Telugu movie review
Director: srivas
Staring: Gopichand,rakul preet singh,brahamanadam
Producer: V.anand prasad
Music: Anoop rubens
Release Date: 26thsep
Rating: 3.5/5
run time -149 mits
Story:
Venkateswarlu (Gopichand) is a luckily go guy who unexpectedly kidnaps Sampath (Babjee) elder sister for the sake of his friend. He leaves to Hyderabad for protection and stays in Syamala ( Satyam Rajesh) house where he fells in love with Chandrakala (Rakul Preet) in the first sight. With all his plans make her to fall in love. On the other side Keshav Reddy (Mukesh Rishi) tries to kill Rakul Preet for the sake of Revenge. Sampath saves her from the danger and takes back to Warangal. Gopichand also comes to warangal to make marriage with her. Gopichand wants to convince Sampath and wants to marry. He uses all his family and how he finally gained the love of Chandrakala forms the rest of the story.
plus points:
minus  points:
Verdict:
loukyam is sure for entertaiment,gopichand back on track by these movie.comedy part in second half ,screenplay,kona venkat dialoges
Audience surly enjoy these movie