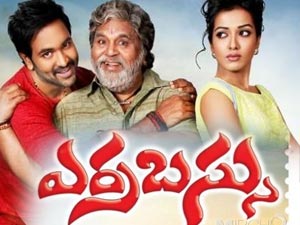 Erra Bassu movie was released 14th november , this movie was remake of Tmil movie ” Manjapai”.It has garned many special elements which naturally created some curiosity of this movie Erra Bassu.Actor – Director Dasari Narayana Rao make this film.This movie is also released in USA at first time in Dasari Narayana Rao’s career.He turned from politics to movie , his acting is well in this movie.The film happens to his 151th film in his career and it is also special to Manchu Vishnu’s career..

The movie Erra Bassu is a simple story of  grand father ( Dasari) and grand son Rajesh ( Manchu Vishnu) focusing on human emotions and bonding between Thaatha and Manumadu.Rajesh is a software engineer , he decided to go US, and he would like spend 3 months with his grand father (Dasari) in the city.Rajesh fall love with raji( catherine) in the city and she is also. As grandfather arrives to his place, then Rajesh’s life takes several dramatic turns .and  his life started with trobles , including his love life, because of his grandpa’s village  where he has arrived..  The story behind How did Rajesh handle the turn of events and how did his grandpa cope with it form the story.

Dasari fits the  role of grandfather hailing from village. His typical village nuances tickle funny some  times and also bring tears at other portions.His acting is very good in this film.

Vishnu Manchu is again proved his mettle.His timing is good of this film.He prepared a own character for urban software engneer.He did a good role in this film.

she is looking beautiful in this movie.She acts as Raji who is also felt love with Rajesh..she is just filter at this film.she doesn’t come out of flying colours through the movie.

Actor Raghu Babu is  surprise package in the film. Raghu Babu as Wire (electrician) played a decent role and engages audience to the film. Senior actors like Nassar are just okay.urali Mohan made a blink-and-miss cameo in the film.

Cinematography is good and Chakri’s music is well. Namasivaya song is just  treat to watch.After longtime lyrics are neat and understandable. However,  there were several unnecessary scenes in this movie.

Remakes are not so easy to handle. Although it was a proved story, it comes with a certain baggage and expectations. Erra Bus reminds you the same as the movie fails to live up to the buzz it created.Towards the end, Dasari’s performance hugs ones hearts. But too much of melodrama in end, heavy dose of sentiment. Comedy scenes with Brahmanandam and MS Narayana just ok  in a big way. They could have been avoided. At the same time, placement of songs clearly interrupts films narrative. All in all, Erra Bus is a putrid copy of Manjapai. It’s just one-time watch provided if you’re great lover of sentiments and human emotions.