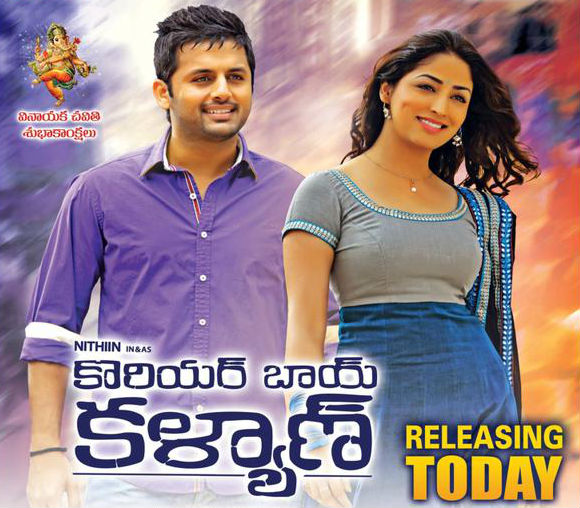 The Much awaited Telugu Movie “Courier Boy Kalyan” (CBK) starring superstar Nithin, Yami Gautam, Ashutosh Rana, is finally out in theatres across the world today. The early audience and box office sentiments is proving positive for the romantic action genre movie. Courier Boy Kalyan was delayed for much more than a year due to date issues. Talking about the story, its a bliss in the rain having a new wave of romance between Actor Nitin and Actress Yami Gautam, its also observed or can be said its a movie influenced by Hollywood Hit “Premium Rush”. The story revolves around Nitin (Kalyan) and Yami playing Kavya in the movie, the city police chasing the courier boy for a envelope, the story takes lot of turns and twist to sizzle the audience.

The movie is being directed by Premsai who also happen to be Prabhudeva former Assistant and his debut Tollywood flick. Premsai has selected some of the best location and picturization are perfect. Produced by Photo Kathaas and Guru Films owned by Gautham menon. The music of the movie is very catchy composed by Karthik, Anup Rubens, Sandeep Chowta. Director Premsai also has scripted the story of the film.

First verdict by the Audience are pretty nice with the performance of Actor Nithin and glamour of Yami Gautam, the story also plays a vital role for the initial success of the movie.