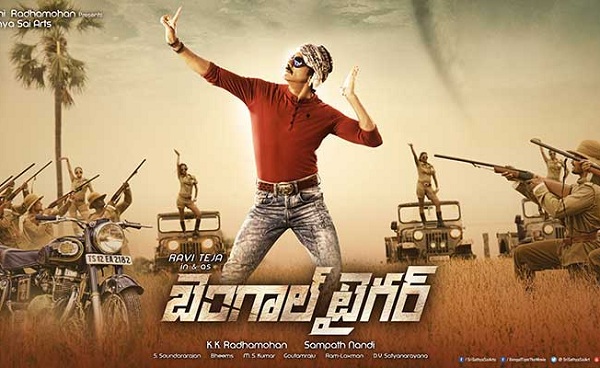 Bengal Tiger starring Mega Star Ravi Teja is all set to roll and release on 5 November 2015, Its a action telugu movie which would also be dubbed in Hindi, It is one of the highest price for Ravi teja movie for Hindi dubbing rights sold at ₹26 million to a Mumbai-based distributor. The movie Bengal Tiger is directed by Sampat Nandi and was officially launched on 30 January 2015 at Ramanaidu Studios. While annouching the Lead actor Ravi teja, Sampat Nandi said the film would have two lead female actress which is finalized and played by Tamannah and Rashi Khanna. The movie has some of the excellent actors playing vital roles Boman Irani, Rao Ramesh, Posani Krishna Murali and Sayaji Shinde. The Music rights of the Film was taken by Junglee music composed by Bheems Cecireleo. The Music release for the movie would be done on October 17, 2015. The movie poster got lot of eyeballs from the audience seeing the teaming of Ravi, Tamannah and Rashi.

Release : The film had lot of changes in the release dates earlier the film was supposed to be released 18th September, but due to Ganesh Chaturthi Indian festival it was postponed to October 2015, but again due to Navratri and clashing of relased dates with movies like “Bruce lee – The Fighter” and “Akhil”, it has finalized to release on 5th November 2015.

The Offical Trailor / Teasor of the movie is launched