Director Sri Raghava known for his hit movies like ‘7G Brindavanam Colony’ ‘Adavari Matalaku Ardhaalu Verule’ has now arrived with a rather unusual subject. Whether it is good enough or not, let us see.
In our review we never reveal the story as we don’t want to spoil your trill watching in theaters. But for this movie we are reveal the story because of  its level and we don’t want to waste your money. 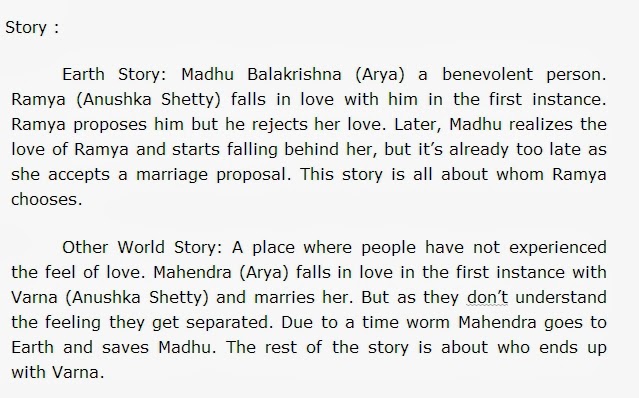 Performances:
Arya who has passion towards acting has satisfied dual role character in the film, even he showed his energy and interest to make few scenes with intensity but everything failed. When we talk about the Anushka, starting looking old and even in some shots her face looked crabby face and her role is not at all impressive. The other actors are just their to be on the screen
Plus Points:
The only plus point in the movie is that its visual effects but this is only the thing which audience may like nothing more than that. The great music director Harris Jayaraj music is not at all up to the mark.
Minus Points:
There are many minus points main thing which we can notice is no clarity for the director which he actually doing. In few scenes there is no sense what is happening. In second half the complete direction is bad. Even the songs placement is bad.

Final Verdict:
Better if you don’t watch this movie. Its completely wasting of money. But if you want to see awesome visual effects then you can watch. Movie ki enduku vacham ra babu anni anukovadam marthram sure.
IBO Rating for Varna movie: 1.6/5

Varna – Will it be a VarnaFX flick??
Samantha sensational statement on Anushka
Advertisement